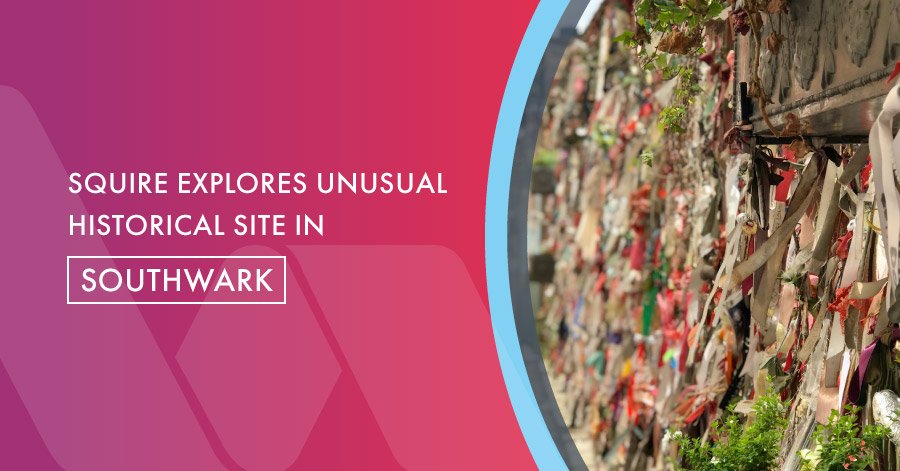 Working in and around the City of London means we are often surrounded by fascinating history. Earlier this year, we discovered the hidden Novo Cemetery site at Queen Mary’s University campus in East London, and more recently, we came across another fascinating historical site in Southwark. Squire Energy’s Project Manager, Steve Gray, was on site for a project proposing new domestic properties at St Margaret’s Court when he took a stroll around the block and stumbled upon the Crossbones Graveyard.

The history of this post-medieval site, dating back to 1107, is a strange and sad story of forgotten people in this once impoverished area of London. It contains the remains of more than 15,000 men, women and children who lived and worked in the area. According to local tradition, it was known as the ‘Single Women’s Churchyard’ for the ‘Winchester Geese’, women licensed by the Bishop of Winchester to work in ‘stews’ or brothels.

Sadly, every time there is construction work on and around the site, new remains are discovered, including in 1991 when archaeologists from the Museum of London were called in to carry out excavations after 148 skeletons were discovered while work was taking place to extend the Jubilee Line.

On 23rd November 1996, a local writer by the name of John Constable had a vision of the spirit of one of the brothel workers, ‘The Goose’, who led him through the streets of Borough to the gates of the desolate site in Redcross Way, ‘unveiling the secret history of the Crossbones’. He says that in the dream he had never seen the site before and didn’t realise it was a real place until researching his strange visions and reading about the bones discovered during the Jubilee Line extension a few years earlier.

The visions inspired him to write a poem, which later grew into a cycle of poems and plays called The Southwark Mysteries. It was performed in full at The Globe and Southwark Cathedral in 2000 and 2010, and spawned The Halloween of Crossbones ritual, performed annually by Constable and his Southwark Mysteries Group up until 2010 as a way to honour the dead with candles, ribbons, songs and offerings. Ribbons tied to the gates in Redcross Way over the years have become a shrine to ‘the outcast dead’ and their names are still read out in monthly vigils at the site.

The last person to be interred at Crossbones was Sarah Fleming, who was buried there on Halloween back in 1853. Strangely enough, she was a resident of St Margaret’s Court, the site of our client’s proposed new project!

To find out more about Crossbones Graveyard click here.