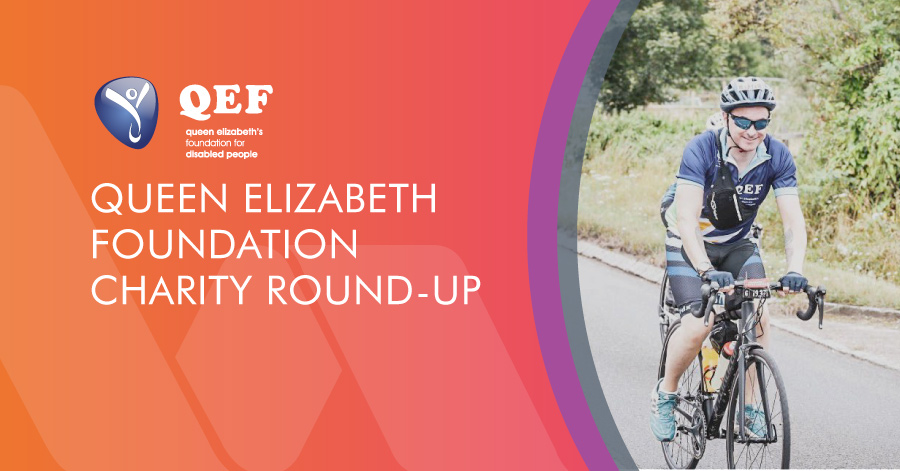 It’s been a just a short six months since we announced our partnership with the Queen Elizabeth Foundation (QEF), and in that time the team at Squire have scaled mountains, journeyed hundreds of miles on two wheels and even won a coveted ‘Pub Quiz Masterminds’ crown.

It all began in April, with QEF chosen as our official charity partner, forming part of our commitment to giving back to the community in 2019 with the sponsorship of a local charity. Impressed by QEF’s innovative approach to assistive technology, we decided to focus our efforts on raising funds for a new ‘Bugzi’ unit – a chair for two-to-six year olds which gives children a little more independence, as well as supporting QEF in building a brand new Care and Rehabilitation Centre.

We began the partnership by attending the Spring Ladies Lunch at Epsom Downs racecourse, with Joanna Loxeley, Jasmin Turner, Denise Jarvis and Louise Boccaccini representing Squire Energy. The day included a browse around the craft fair, drinks reception, meal, charity raffle / auction and a talk from the famous model and presenter Lisa Snowdon. We also saw first-hand the amazing work QEF do to support children with disabilities, as we were introduced to Courtney, a young girl and user of a ‘Bugzi’ unit.

In June, one of our Project Managers, Steve Gray, attended Queen Elizabeth’s ‘Topping Out’ Ceremony, in support of their newly-built Care and Rehabilitation Centre. The £15 million development is due to open in Spring 2020 and will help disabled people lead more independent lives. Read the full story here. Steve was also one of 25 riders representing the Queen Elizabeth Foundation at Prudential RideLondon, in July. The 100-mile ride took Steve through the streets of London and Surrey’s hills, and he raised £240 for QEF.

Next on the fundraising agenda was something which required brainpower rather than brawn –The Pub Quiz. Hosted by Squire Energy in August at a local pub in Leatherhead, it culminated in a nail-biting tiebreaker, which the ‘Squire Squirrels’ went on win – read the full story here. Topping up the donations with the £100 prize money, we raised £507.

And most recently, over the August Bank Holiday, our very own Operations Administrator, David Porter, took on the ‘Three Peaks’ Challenge’ and raised an amazing £1,150 for the Queen Elizabeth Foundation.

“The fundraising efforts of the team at Squire Energy have been beyond commendable, and we still have six months to go,” says Steve Gray, “The Queen Elizabeth Foundation is a hugely worthwhile charity, and we’re determined to meet our target of raising enough funds for a new ‘Bugzi’ chair.”

To date, Squire Energy have raised almost £2,000 and we’re got plenty more events planned for the rest of year to support QEF’s vision in helping disabled people lead more independent and rewarding lives. Later in November, we will be attending the 54th Guinness and Oyster Luncheon at Mansion House in London, helping to raise more funds for the Queen Elizabeth Foundation.

Find out more about our partnership with the QEF here.