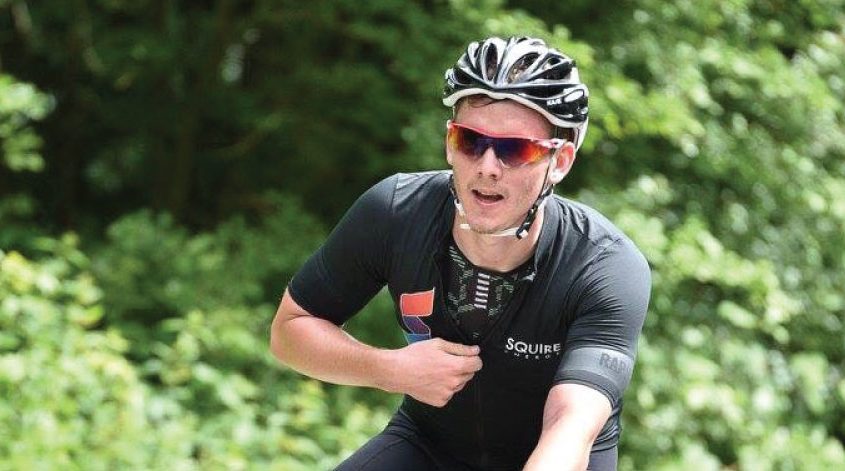 At Squire Energy, moving gas from A to B is our usual business, but last month, we contributed to the transportation of a very different type of energy source. One of our Works Planners, Sam Sneyd, took part in an incredible feat of endurance, strength and fitness Sunday 11th June 2017; the Evans Cycle King of The Downs, and we are proud to announce that Squire Energy were sponsors of Sam’s kit.

A triathlon is a true trial of an athlete’s fitness, comprised of three tough tests of sporting prowess which are completed in succession, with no rest. Although there are variations as to the three activities undertaken, the most common trio consists of swimming, cycling and running. Indeed, this set-up was the challenge facing Sam, resulting in the need for a multi-functional kit which could tackle the tests of the triathlon head on. Squire Energy sponsored his full kit, which included cycling shorts and gillet, sleeved cycling jerseys and an innovative triathlon suit.

“We are privileged to sponsor Sam’s triathlon kit; his dedication and passion for the sport is inspirational, and are qualities which are reflected in Squire’s own company ethos.” Says John Burke, Construction Manager, “It’s a tremendous achievement. Plus, it’s a real thrill to see our distinctive logo whiz past at speed!”

But, a professional kit is merely the finishing touch on a well-oiled, efficient machine. To prepare for the triathlon, Sam’s undertook a training schedule which would have made ordinary mortals weep. “When I’m getting ready to race, I have to strike the right balance of strength, endurance and cardio, meaning a varied weekly workout schedule.” Sam recalls. “As a given, I cycle to and from work every day. After work activities can include anything from 3200m swims to 11 mile runs, couple with strengthening gym sessions. At the weekends, I increase this to 12-22 miles runs, 4000m swims in open lakes and 110 mile bikes rides.”

Sam is no stranger to this sporting spectacular, having been bitten by the triathlon bug in 2012 after a knee injury left him unable to play football. “I haven’t looked back since.” Indeed, last month’s Kings of Down event was in preparation for an even tougher challenge; next on the agenda is a full-length long distance triathlon. July will see Sam compete in ‘The Outlaw 2017’ event, which will involve a 2.4mile open water swim, a 112 mile cycle and conclude with a 26.2 mile run.

And in September, Sam will be taking part in the Rapha M2L 2017, a 220 mile charity ride from Manchester to London to raise money for children affected by autism. If you wish to support Sam and the charity, you can donate by clicking here.