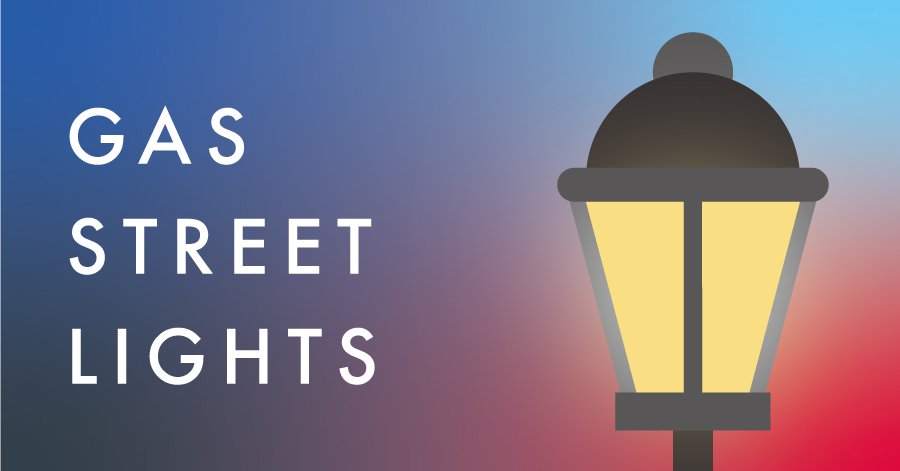 The history of gas street lights

The first well-recorded public street lighting with gas was demonstrated in Pall Mall, London, on January 28, 1807. In June of that year,   a line of gas street lights was illuminated by Frederick Winsor, an engineer, to celebrate the birthday of King George III. Each one was fed with gas pipes made from the barrels of old musket guns and applying a single spark lit up the whole street.

In 1812, Parliament granted a charter to the London and Westminster Gas Light and Coke Company, and the first gas company in the world came into being. Less than two years later, on December 31, 1813, the Westminster Bridge was lit by gas street lights. By 1823, numerous towns and cities throughout Britain were lit by gas. Gaslight cost up to 75% less than oil lamps or candles, which helped to accelerate its development and deployment. By 1859, gas lighting was to be found all over Britain and about a thousand gas works had sprung up to meet the demand for the new fuel. The brighter lighting which gas provided allowed people to read more easily and for longer. This helped to stimulate literacy and learning.

Electric street lighting was first introduced in 1878 along the Thames Embankment and near Holborn Viaduct quickly becoming more popular and leading to the demise of most gas street lighting. The first street to be lit with electricity as we know it was – obvious really – Electric Avenue in Brixton, 1880! However, there are still 1,500 functioning gas street lights in London today.

There are just five lamplighters left in London who maintain these 1,300 gas lamps, from Richmond Bridge in the West to Bromley-by-Bow in the East. The long avenue of Kensington Palace Gardens is lit only by gas lamps. Each lamp is visited on a fortnightly rotation. Their mechanisms have to be wound and checked, the glass polished (‘We use Mr. Muscle,’ confesses lamplighter John), and the ‘mantles’ replaced. Whereas Kensington Palace is happy to let the lamplighters shimmy up its lampposts, our politicians are more precious. The Houses of Parliament looks after theiritsits own lamps. Hyde Park, too, has its own lamplighters. Each lamp is marked with the crest of the monarch in the year it was erected. The oldest gas lamps in London can be found on Birdcage Walk with George IV’s insignia.

Gas lanterns vary in type and size of lantern, number of mantles, clock operation, materials and age. Mantles are teardrop-shaped elements which look, from the ground, like bulbs. But up close, they are revealed to be tiny, bell-shaped, silk casings coated in lime-oxide, which becomes white-hot to give the lamps their glow.

There are two types of mantles in use; the original No. 1 Mantles and No. 2 Mantles, which are larger and produce more light. Mantles are generally arranged in clusters of two, four or six however some of the larger lanterns have as many as 10 or 12.

Each unit is fitted with a regulator to control the gas pressure; a pressure of 21mbar is understood to give the optimum light output. If the pressure is too high, the efficacy and life of the mantle is greatly reduced and conversely, if the pressure is too low the light output decreases. Modern gas lanterns generally retain the same lantern shape, size (subject to number of mantles) and materials as the existing lamps, but have the benefits are made from of a stainless steel or white painted chimney and/or a reflector plate to improve the light distribution and efficiency of the lantern. Superheated No. 2 mantles and ceramic nozzles improve incandescence, and a programmable time clock with photocell to automatically switch the gas on when required removing removes the need for a maintenance visit every two weeks.

1. Some of the original lanterns still hang within Westminster Abbey and the same technology is still used to this day. Westminster Abbey cloisters are lit by gas. The oldest lamp is in Dean’s Yard, near the group entrance, fixed to the wall. This has been there for 200 years as a gas lamp, and before that, as an oil lamp.
2. There are modern gas lamps near the statue of the Queen Mother by St. James’ Park statue, which was dedicated in 2009, as the Royal family refused to have electric ones – “The Royal family is very pro gas”.
3. Carting Lane besides the Savoy hotel has a sewer gas lamp which burns 24 hours a day. It draws up sewer gas with the heat of the gas flame. Sewer gas is then burned as it reaches the flame.  It was erected to keep sewer smells away from the hotel bedrooms!

Keep up to date with the the latest news via social media. We are on: Facebook, Twitter & LinkedIn.