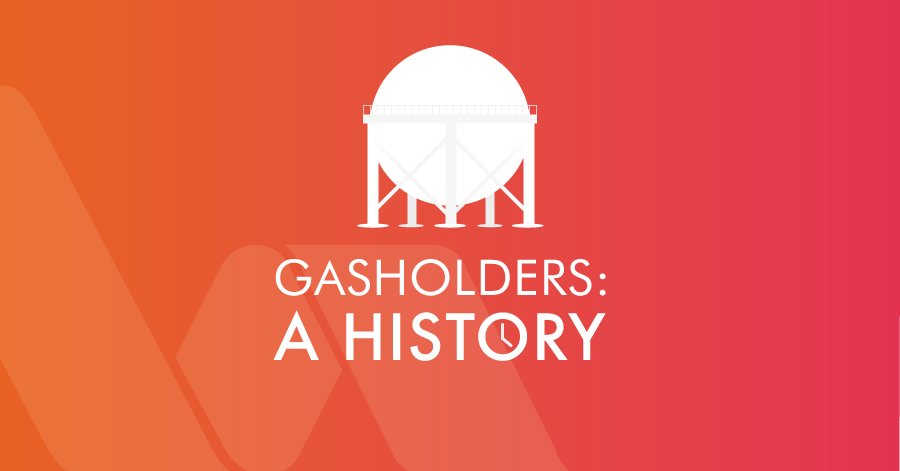 Known as gasholders or gasometers, these enormous containers are made from metal bolted together and are used to stored vast amounts of natural gas near atmospheric pressure. The first gasholders were solid spherical containers, supported by equally solid, sturdy legs that held them steady. But in 1824 in Leeds, a new type of gasholder was invented; the telescopic gas holder. A steel frame surrounds vessels (lifts), which are situated either side of each other and rise and fall as capacity is reached, with the gas flowing back out the main pipe as demand dictates. Spirally guided gasholders emerged in 1980, which did away with the need for external columns or guide frames, but still boasted a huge capacity for storage – up to two million cubic feet – and they continued to spring up all over the country in the early 20th century.

Emerging in the Victorian times, gasometers were built in an era where industrialisation was booming, towns were expanding and cities were getting even bigger, producing a thirst for energy that had never been seen before. And natural gas could quench this demand, ensuring that communities of all sizes had a continuous supply of energy for heating and lighting. Arguably, gas lit the way for the creation of the cities we have today, particularly with the use of gas in street lighting and provision of warmth.

However, by the 1980s, energy infrastructure started to improve as Britain tapped into newly discovered sources of natural gas in the North Sea, and the use of gasometers steadily started to decline. With their empty metal shells reminders of times gone past, London gasometers found a new – if obscure – purpose in the late 80s and 90s, as the venue for the underground music scenes and illicit raves. But this scene was relatively short-lived, as 1999 was the year that decline turned into demolition and the National Grid made the decision to permanently remove these metal giants from our skylines.

Since the turn of this century, dozens of defunct gasholders have disappeared from our horizons, with the land almost always sold for redevelopment. However, some of the older gasholders have acquired listed status, as their stoic beauty and intricate metalwork serve to remind us of our industrial roots. Some projects are a comfortable combination of preservation and reenergisation, such as the project at King’s Cross. Three Grade II Victorian cast-iron gasholders which formed part of Pancras Gasworks, were painstakingly dismantled, shipped to Yorkshire for restoration and then reassembled in King’s Cross, encasing 145 newly built luxury apartments. Another Pancras gasholder, no.8, was also dismantled, restored and reassembled on the banks of the canal to create Gasholder Park, where it encases a sculpted canopy and circular lawn.

Most gasholders have either been dismantled or retired and the very few that are still functioning are being used for balancing purposes, to ensure gas pipes operate within a safe range of pressures. But natural gas has and continues to play a hugely important role, providing our communities with the energy needed to satisfy global demand, especially as the world shies away from coal and fossil fuels in favour of more environmentally friendly energy.

Going forward, Squire Energy will continue to be a major exponent of natural gas and aim to provide our expertise, knowledge and accredited services to existing and new customers in the UK for the construction, delivery and installation of new gas infrastructure and primary metering services.

Do you think gasholders should be preserved for posterity, or redeveloped?