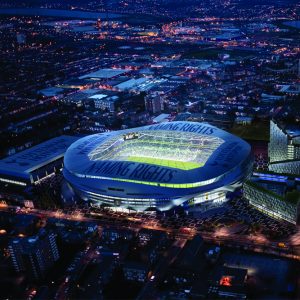 In 2014, we were invited by Tottenham Hotspur Football Club to quote for the installation of the gas infrastructure for the redesigned football club stadium and to our delight, we won the bid.

Squire’s task was two-fold; temporary re-routing and eventual disconnection of the old stadium gas supply, as well as the installation of a brand-new gas connection. Work was scheduled for completion in three phases, with Phase 1 starting early in 2016, as construction of the new stadium began directly adjacent to the old one.

With the stadium in a prime location, the team had to divert around several existing utilities supplies, as well as plan for automatic bollards which were schedule for future installation. The specification for the new gas installation was a low-pressure supply, using a standard SDR17 250ml, 10-inch pipe polyethylene pipe to the length of approximately 50 metres. Although it was a low-pressure supply, due to the size of supply, a bespoke entry was made from 200ml 8-inch steel to connect the gas supply into the building.

The stadium’s proximity to Tottenham High Road meant that Squire had to trench across four busy lanes of traffic to connect the newly installed gas pipes to the existing main supply. To avoid bringing one of Tottenham’s main roads to a standstill, the team excavated the ground lane by lane to allow a continuing flow of traffic in both directions.

As well as the installation of a new supply, we were also tasked with taking care of the existing gas connection, which meant temporarily re-routing the existing gas to the still- standing half of the stadium before disconnection when White Hart Lane was reduced to rubble.

With the stadium now open, we’re still on hand to offer advice and assistance, in keeping with our ethos of always providing of exemplary customer service and absolute professionalism in all the work we do.