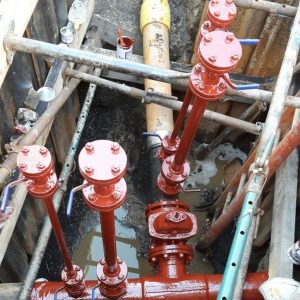 Squire Energy were approached by Welsh Power for the installation of the gas infrastructure for a brand-new power plant in 2016. The two companies are no strangers; with more than 20 successful project completions in the last two years, Welsh Power are clearly confident in Squire Energy’s abilities to deliver, and to deliver well.

Set in the idyllic surroundings of Selby, work began on the project in late September 2016, with a hand-picked team from Squire Energy tasked with constructing a 180mm PE100 pipeline to facilitate a supply to a governor/meter unit. This new pipeline was to be supplied via a Hop Tap under pressure connection from the existing 6” NB steel pipeline.
The required gas demand of this particular project was significant, triggering the possibility that Squire Energy would need to reinforce the gas network to support the new development. Fortunately, thorough capacity checks are ingrained in the way that Squire Energy operates, with initial checks conducted during the quote-building process.

The new gas installation was predominantly made from GIS approved PE100 SDR11, 18mm thick and 180mm in diameter, with the new 500 metre IP pipe installed by Squire Energy’s engineers over a five-week period to connect the Selby Power Plant to the gas mains. Through close collaboration with the local authorities and careful negotiations with the highways authority, as well as careful planning from Squire Energy’s Operations team, the installation was carried out with minimal disruption along the existing busy access road.

As well as installing the new incoming supply to this site, Squire Energy were also tasked with the supply and installation of a gas meter operating at a pressure of 200mbar. Based on the load requirements of the plant of 16MW, Squire Energy used these parameters to design an IP Turbine Meter, which was delivered to site and commissioned to ensure that the site could use the required amount of gas as soon as works were concluded.