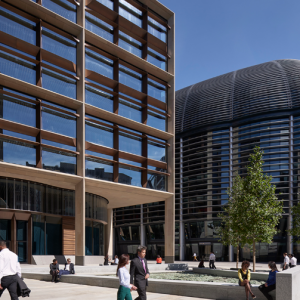 In 2012, Squire Energy was approached by M&E consultants, Grontmij (now SWECO) and construction company, Sir Robert Alpine, to refine, develop and prepare the gas supply section of the proposal for an exciting new project, Bloomberg London.

The proposal was finally granted approval in late 2014. However, work didn’t begin until January 2015, due to having to secure various permits and consents which were especially important, as earlier preparations and excavations at the site unearthed a number of Ancient Roman artefacts thought to belong the Temple of Mithras.

Work was split across two phases across the two-year timeline, with Phase One addressing the new low-pressure connection to an existing 24” cast-iron gas main in Cannon Street, as well as the installation of new gas infrastructure along Walbrook. Vacuum excavation was employed to draw up dirt and debris to safely locate the existing utilities, before the pipes were fitted.

Works were finally completed in March 2017, and Bloomberg London opened its doors a few months later, establishing itself as one of the most iconic buildings in London. Not only an office, it houses three new public space at the corners of site with water features by Spanish artist Cristina Iglesias and the ancient ruins of Temple of Mithras are open to the public seven metres underground.