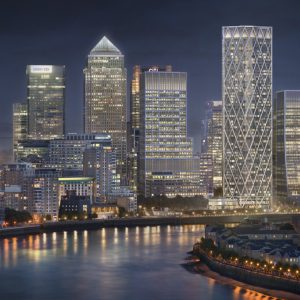 In 2015, Canary Wharf Contractors approached Squire Energy for the installation of new gas pipes and low-pressure connection for two developments; 1 Bank Street and Newfoundland. Canary Wharf Contractors (CWC) – did the excavation work in preparation for the installation of the pipes and the work was split into phases. For 1 Bank Street, the initial connection marked the completion of phase one in January 2016, with phase 2 of work beginning in April 2018. Work for Newfoundland commenced at approximately the same time, with phase 1 started in September 2017 and phase 2 complete in April 2018

The initial phase required Squire Energy to connect to the 250mm parent main with a branch saddle connection, using 180mm PE pipe. The pipes were laid, stopping two metres shy of the proposed entrance of 1 Bank Street, terminating at a service isolation valve. A follow-up visit in April 2018 necessitated the need to employ a welding contractor to fabricate a bespoke 6in steel entry into the basement, which terminated at a 6in emergency control valve, in preparation for a 23m rotary meter to be installed. The rotary meter was installed and commissioned a week later, ready for CWC to start commissioning their installation in December 2018.

Similarly, the pipework for Newfoundland stopped two metres from the building entrance, although the pipe was a 250mm, 8-inch bespoke steel entry. In both instances, CWC followed closely behind, laying concrete and tarmac so that access to the site could be maintained in preparation for the subsequent construction phase of building works.

With both sites located in the heart of London’s financial district, the route for the pipework had to be meticulously planned, to avoid expensive fibre optic cables snaking underneath some of the city’s most important financial institutions. If the cables were inadvertently damaged during the excavation and pipe installation, there was a risk of receiving a bill charging millions of pounds a minute in lost business revenue.

Both buildings are nearing completion, with Newfoundland and 1 Bank Street earmarked to open in 2019.